Mippin
Home Articles Delayed Onset Muscle Soreness (DOMS): Should You Worry About It?

Unless we figure out a way to download our consciousness into a server (which might actually happen by the end of 2100), no human will ever be able to escape muscle fever. It’s one of those facts of life we just have to learn to live with from a very young age. Medically referred to as delayed onset muscle soreness (DOMS), this nasty state can occur in elite athletes, as well as in novice players of the occasional sport; during a friendly football match, 90 minutes of intense house cleaning before the holidays, or a Grand Slam final. 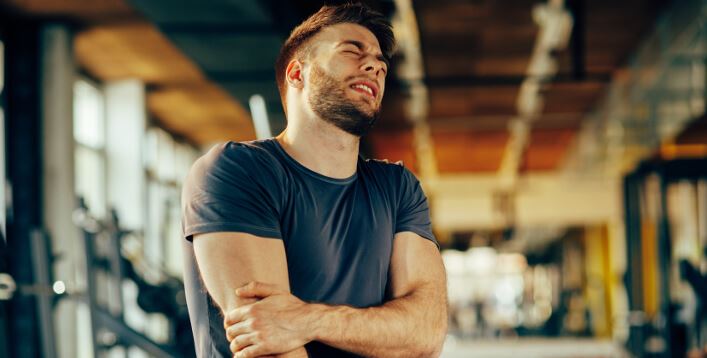 Although extremely off-putting, this discomfort is actually beneficial for you in the long run. Think of it as the kernel of truth behind the trite adage of “no pain, no gain.” This doesn’t mean that pain is always good, but more on that later. If over a hundred gene expressions can be changed by physical activity [1], we’re bound to see (and feel) some effects in our bodies too.

What Happens When We Experience DOMS?

The principle behind DOMS is that we usually experience it when we have to make our muscles work harder than usual, in a different way, or both. You can expect the ache to come around when you begin a new training routine, change your current programme, or restart your workouts after an extended break. The awesome part is that the moment you use your muscles in an activity, the latter adapt and react better to it. Experts refer to this as the repeated bout effect or RBE.

Both mechanical tension and metabolic stress can lead to DOMS and the latter occurs mostly as a result of eccentric movements: for instance, when you elongate your biceps muscle as you slowly let the weight down after a curl. The eccentric activities are also the ones most responsible for micro-tears to your muscle fibres. This is damage that ultimately leads to inflammation and then to growth [2].

Many believe that it is the micro-tears or the inflammation itself behind the pain. However, other research suggests that the soreness is actually the result of nerve growth [3] and that pain itself is a response to the latter. In this mechanism, inflammation’s role seems to be that of a protector against what is causing the pain in the first place. And it certainly makes sense, since it’s an immune response. Although not yet definitively proven in humans, animal studies have successfully supressed DOMS with the help of a compound aimed at neurotrophic factors.

Neither I, nor any doctor would recommend such drugs, though. The pain is a natural part of growing your muscle tissue. It usually starts with a bit of delay from when you stop exercising (although, in cases of extreme activity, there’s little to no wait) and it should subside after a maximum of 72 hours from on-set. Repeating the same workout after a couple of days will trigger a less painful response, so try to keep that in mind if you find the aching discouraging.

How to Manage Your Post-Exercise Pain (DOMS)

Since we don’t fully understand the mechanism behind DOMS, there is therefore no magical cure for muscle fever. Some chiropractors like to proclaim that a certain massage technique they specialize in will magically make everything better. The evidence for this kind of therapy is mixed, as well as tainted by confirmation bias [4]. It might work, but, then again, it might not.

Non-steroidal anti-inflammatory drugs (NSAIDs), such as Ibuprofen, may sometimes reduce the pain. The problem is that soreness itself isn’t a direct result of the inflammation, especially since it has been shown that inflammation increases in DOMS as the pain was fading away. A bit counter-intuitive to widespread beliefs about muscle fever, isn’t it? What’s more concerning is that taking such medication may actually hinder the healing process [5]. Remember that, while inflammation might be an immune response, it’s also intricately linked to muscle growth.

My advice is to (literally) meditate and associate this particular type of ache with a good outcome. What makes me feel better is to think of the intense scene in the original Matrix when Neo’s muscles are rebuilt. It’s painful, but (in this case), it’s part of the natural growth process.

If the soreness becomes unbearable or your urine turns dark brown, you need to see your doctor immediately. Odds are that you’ve gone way beyond what is physically possible for you and your muscle tissue is screaming for help because the damage is too widespread. In these cases, the latter is releasing more myoglobin than normal, which can be toxic in high amounts. This condition is called rhabdomyolysis and, if left untreated, it will lead to serious kidney damage and even kidney failure.

Conversely, you can ensure that DOMS goes away as fast as possible by drinking enough fluids. If you don’t hydrate sufficiently, both the pain and the damage will worsen, rather than get better [6]. Secondly, you have to eat a balanced, whole foods diet. Eating less meat and dairy products will significantly reduce overall inflammation, which we know can lead to tissue damage if it stays around for more than needed [7]. And get a good night’s sleep.

Although more proof is needed, there is evidence to suggest that hot water and foods rich in anti-oxidants such as turmeric, will help take the edge off your DOMS symptoms, so don’t be afraid to draw yourself a nice, hot bath after your workout. Replace your sugary desert with a cup (or more) of turmeric tea and make sure to eat a lot of fresh fruits, vegetables, legumes, nuts, and seeds.

Getting Over Muscle Fever (DOMS treatments)

This is one of those situations where you just need to get over it. The soreness is a sign that your fitness is improving. Eating healthy, antioxidant-rich foods, which can easily be thought of as “a lot of everything except dairy, meat, sugar, and processed products,” will go a long way to achieving a more manageable DOMS. To hasten your recovery, you can also do a bit of stretching or light exercise, since getting your blood to circulate will help nutrients reach the damaged cells for better healing.

Improved circulation is also part of the reason why a good jacuzzi session will alleviate your aches. Then again, everything is better after a warm, wholesome underwater jet massage. If you needed an excuse to buy one of these, you’ve found it.

[7] Changes in Lipids and Inflammatory Markers after Consuming Diets High in Red Meat or Dairy for Four Weeks – https://www.ncbi.nlm.nih.gov/pmc/articles/PMC5579679/